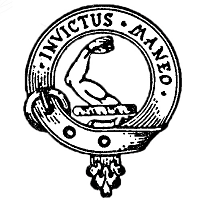 Of course all our personal Armstrong ancestors are famous or even notorious but the majority of them are just ordinary run of the mill folk.

However you might have in your line an Armstrong, for some historic reason or other, stands out above the rest but is rarely heard of.

Here are three from one of our member's ancestors.

Keep an eye open on this list we hope to be adding to it soon when members reexamine their pedigrees.

Sir Andrew Armstrong (1785-1863) of Gallen Priory. Andrew gathered a large collection of the usual titles (e.g. Lord Lieutenant, ...) but in 1831 he was made Receiver-General of Stamp Duties in Ireland for which he was made the first Baronet, of Gallen Priory. From 1841 to 1852 he was an MP for King's County: Hansard records speeches he made declaring sympathy and pleading for help for the plight of the Irish people.

Neville Percy Proby Armstrong, aka Neville Alexander Drummond Armstrong, O.B.E; F.R.G.S. (1874-1954). Neville went on the Yukon Gold rush and spent 30 years exploring the Yukon Territory. Mount Armstrong and the Armstrong Landing on the Macmillan River are named after him. He wrote two books about his life in the territory: Yukon Yesterdays and After Big Game in the Upper Yukon. Neville was a crack shot and trained the British Army in sniper warfare. He lived on Victoria Island, BC and helped financing the railway there.
​
Lieutenant Thomas Armstrong (1706-1758), sometime Governor of Menorca and author of the first history of the island in English in 1752.