A traditional story claims that the Armstrong clan progenitor was Fairbairn, an armour bearer to a king of Scotland, who rescued his master when he had his horse killed under him in battle. Fairbairn allegedly grasped the king by his thigh and set him on his own horse. An astonishing feat of strength that cynics suggest was a physical impossibility due to the weight of medieval armour.

Siward, an Anglo-Danish earl, is another who has been claimed as our forebear. Siward was a hugely important historical figure who experts state had sons who perished without leaving male issue. Not surprisingly, neither of these origin-legends are ever supported by valid reference material!

Fortunately we live in an age when science, in the form of DNA research, allied to more rigorous studies of medieval documents, is enabling us to construct a more accurate picture of our true roots. The Armstrong mainstream descent cluster has Y-DNA that shows a heavy central and north-east Scottish bias, suggesting Pictish, or pre-Pictish, origins. That information dovetailed neatly with a ‘People of the British Isles’ DNA survey which revealed that the DNA of northern Britain was scarcely affected by the arrival of Roman, Viking and Norman invaders.

Our surname was first recorded in Ousby, Cumberland in 1223. The region was considered Scottish between 1135 and 1157, around the time our first Armstrong, or his father, was born. The epithet ‘Arm Strong’ is constructed using the P-Celtic form - the language of the indigenous people. To conclude, it appears our ancestors were of such ancient stock, who withstood the might of numerous invaders. In keeping with our ‘Invictus Maneo’ clan motto, we still remain unvanquished!

For almost 300 years, from the late 13th century until the early 17th century, the English/Scotish Border region was in turmoil. England and Scotland were often at war during this period.  The border families, including the Armstrongs, were living in the front line of this 'war zone'.

Tensions remained high even when the countries were not at war, with personal rivalries and animosity carrying over into an unsettled peace. On each side of the border the authorities appointed "Wardens of the Marches" to enforce a form of cross-border justice.  It was a difficult & unenviable task, and they weren't always effective.

The Parishes of Canonbie and Kirkandrews passed back and forth between Scottish and English rule, forming a 7,400 acre area that came to be known as the Debatable Land.'  The Armstrongs lived in and around the Debatable Land, in Liddesdale, Eskdale and Annandale.

The uncertain jurisdiction of the Debatable Land was the perfect place for lawbreakers on both sides of the border.  People could not expect protection from the authorities.  If their cattle were stolen, or their kinsman was murdered, who could they turn to?  Many people found strength and protection in their families, and made their own rough justice.

In these extreme circumstances, some border families turned to "reiving" (ie: robbing & plundering) to ensure the survival of their families and communities.  Many lowland clans and families along the border became Border Reivers: Armstrong, Graham, Nixon, Elliot, Scott, Charlton, Robson and Bell were some of these.

Their exploits were recalled in border ballads that told of romantic reiver folk heroes, good men at heart, fighting to a code of honour and avoiding unnecessary bloodshed. In 1802, Sir Walter Scott published a collection of Border Ballads and added his own 'spin' on this romantic myth.  The reality was often different. 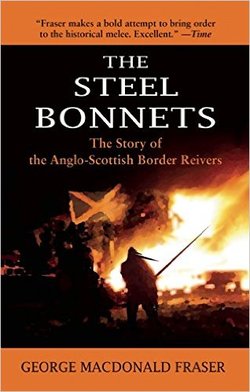 George MacDonald Fraser, in his book The Steel Bonnets: The Story of the Anglo-Scottish Border Reivers says this about the Armstrongs:

"The Armstrongs were the most feared and dangerous riding clan on the whole frontier.  ...  In Johnnie Armstrong's day they could put 3,000 men in the saddle and probably did more damage by foray than any other two families combined, both in England and Scotland"

The Armstrongs built Gilnockie Tower, on the banks of the River Esk, around 1520.  This was one of several defensible stone towers in the border area.

The Armstrong Clan was such a powerful force in the borders that King James V of Scotland saw them as a threat to his own authority.  The Ballad of Johnnie Armstrong tells the story of how, in 1529, James V asked Johnnie Armstrong of Gilnockie to join him at Court and promised his safety, then betrayed their trust.  History records that Johnnie Armstrong was hanged at Carlenrig along with 36 of his men.

James V's broken promise did little to pacify the borders, and the reiving continued.  That all changed when the Union of the Crowns saw James VI of Scotland accede to the throne of England on 11 July 1603.  This brought an official end to the Anglo-Scottish Wars and from that moment onwards the days of the Border Reivers were numbered.

The new King of Great Britain set about the Pacification of the Borders, ordering all the fortified houses in those parts to be demolished, and for the locals to turn to agriculture and peace. Gilnockie Tower was one of the few that survived.   Those who defied these orders suffered a swift & savage summary "justice", none more so than the Armstrong clan. Known thieves were rounded up and hundreds were executed without much in the way of a trial; charges were trumped up, or old charges were revived, and mass executions followed.  Many were deported to Ireland, and their home lands were confiscated.   It only took 7 years for reiving society to be dismantled, and the last Chief of Clan Armstrong - Archibald Armstrong of Mangerton – was hanged around 1610.

Armstrongs Around the World

The Armstrongs may have been deported, and lost their lands & Chieftain, but they took with them their ancient qualities of bravery, independence and strength of mind and body.  The qualities that had made the Armstrongs so successful as Border Reivers equipped them well for the next chapter in the Clan's history, as they travelled on to new lands around the world.

Over the next centuries the residue of the Armstrong Clan dispersed around the world.   Some Armstrongs went to fight in the Netherlands.  The Armstrong Chronicles claim that several Armstrongs from the area near Gilnockie Tower died in Virginia around 1623, about the time The Mayflower landed at Plymouth Rock.

It is often difficult to find primary sources for records of these early years, but the Association's international researchers enjoy a challenge and we have found parish records of one group, thought to be siblings, who made it from England to Barbados before 1650: Stephen, Edward & Mary Armstrong. Edward went on to have a large family that scattered all over the world.  The Association has several current members in the USA and Canada who are related to this line.

Many Armstrong families emigrated to Ireland, Canada, the USA, Australia, New Zealand, and every corner of the planet and went on to raise large families.  Their stories are varied and interesting, but one man’s story perfectly illustrates the pioneering bravery and strength of spirit that makes the Armstrong Clan special.  He was descended from Armstrongs who had moved to Ireland.  Almost 300 years ago, his 5th great-grandfather, John Armstrong, emigrated to Pennsylvania.  This man was born in Wapakoneta, Ohio on 5 August 1930 and, 39 years later on 20 July 1969, he became the first man to walk on the moon; Neil Alden Armstrong.

Neil Armstrong had strong ties to his Clan roots.  In March 1974, Neil Armstrong returned to the land of his ancestors.  He was made a Freeman of Langholm, and climbed the stairs to the top of Gilnockie Tower which now has a small exhibition commemorating the Clan's most famous son.

Which brings the Armstrong story full circle.  Centuries after Johnnie Armstrong of Gilnockie went reiving by the light of the moon to feed his family, Neil Armstrong, the man who walked on that moon, returned to the Borders to explore his roots and climb Gilnockie Tower.

It makes you proud to be an Armstrong!